SRO Alcott began his Law Enforcement Career in 2013. Alcott graduated the Cape May County Police Academy in July of 2013 and was employed as a SLEO Class II Officer with the Wildwood Police Department for one summer.

In October of 2013, Alcott was hired by the Woodbury City Police Department as a SLEO Class II Officer. Alcott primarily walked foot beat during nights on South Broad Street and the surrounding areas during his time as a Class II Officer. In February of 2015, Alcott was promoted to a Full Time Patrolman. Alcott remained in the Patrol Division until July of 2018.

Alcott is also part of an afterschool program at the Evergreen Ave School called the “Better Man Program”. In the Middle School, Alcott has a small group of students that he mentors and plays basketball with every day during Advisory Period. Alcott has also joined the High School’s “Leader in Me” program, which requires him to be a mentor to a High School student during Advisory Period.

In addition to his work in the schools, Alcott is the liaison to the city’s Spanish-speaking community. Alcott is the department’s only bilingual Spanish-speaking officer. Alcott is currently a volunteer with the Hispanic Family Center of Southern New Jersey and attends monthly advisory board meetings. Alcott is also currently enrolled in Arizona State University to attain a Bachelor’s Degree in Spanish and to become a certified interpreter.

In May of 2019, Alcott was named Gloucester County’s 2018 Officer of the Year at the Gloucester County Police Awards Ceremony. Only one officer in Gloucester County is honored with this coveted award every year. Alcott is very proud to represent his department and school district by receiving this prestigious award. 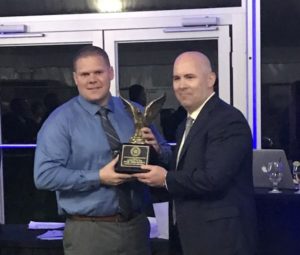